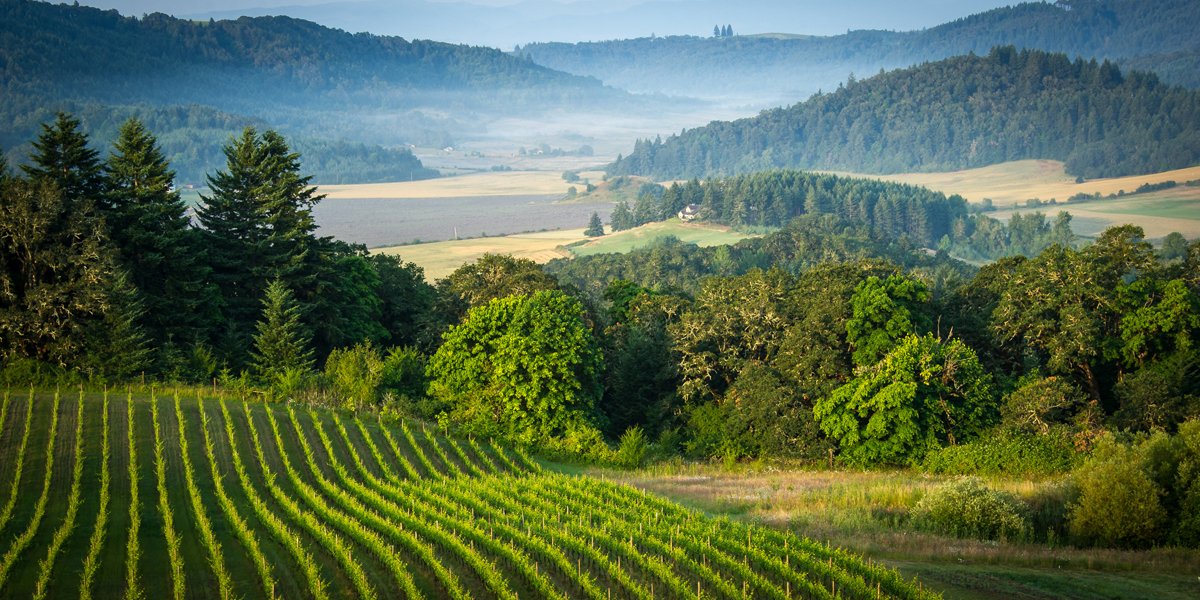 The Willamette Valley is 150 miles long and up to 60 miles wide making it Oregon’s largest AVA. It runs from the Columbia River in Portland south through Salem to the Calapooya Mountains outside Eugene. Named for the river that flows through it, the Willamette Valley has the largest concentration of wineries and vineyards in Oregon and includes seven appellations within its borders: Chehalem Mountains, Dundee Hills, Eola-Amity Hills, McMinnville, Ribbon Ridge, Van Duzer Corridor, and Yamhill-Carlton.

Modern winemaking in the Willamette Valley dates back 50 years with the genius of three UC Davis refugees who believed that Oregon was an ideal place to grow cool-climate varieties. Between 1965 and 1968, David Lett, Charles Coury and Dick Erath separately forged their way to the north Willamette Valley despite negative rumblings from their UC Davis cohorts who told them it was impossible to grow wine grapes in Oregon. They were the first to plant Pinot noir in the Willamette Valley. They also planted small amounts of related varieties, including Pinot gris, Chardonnay and Riesling.  These wine pioneers whole-heartedly believed that Oregon would one day become an important wine-growing region. Other believers were not far behind. Within the next decade, David and Ginny Adelsheim, Ronald and Marjorie Vuylsteke, Richard and Nancy Ponzi, Joe and Pat Campbell, Susan and Bill Sokol Blosser and Myron Redford all planted vineyards in the Willamette Valley.  These families worked in a collaborative spirit, sharing advice, humor and encouragement, as they began writing history by producing superior wines in Oregon. It wasn’t until David Lett entered his 1975 Oregon Pinot noir in the 1979 Gault-Millau French Wine Olympiades and won top Pinot noir honors against France’s best labels that the world started to take notice of Oregon as a serious winemaking region.  The Willamette Valley became an official AVA in 1983. Today, it is recognized as one of the premier wine producing areas in the world. It is most widely known for its award winning Pinot noir, but consistently earns top honors for other such cool-climate varieties as Pinot gris, Chardonnay and Pinot blanc.

The Willamette Valley is relatively mild throughout the year, with cool, wet winters and warm, dry summers. While moisture is abundant, most of the rainfall occurs in the winter, not during growing season. This temperate climate, combined with coastal marine influences, make the gentle growing conditions within the Valley ideal for cool climate grapes, including Pinot noir. The Valley enjoys more daylight hours during the growing season than in any other area of the state. During this longer growing season, the Willamette Valley enjoys warm days and cool nights, a diurnal temperature swing that allows the wine grapes to develop their flavor and complexity while retaining their natural acidity.

The Willamette Valley is an old volcanic and sedimentary seabed that has been overlaid with gravel, silt, rock and boulders brought by the Missoula Floods from Montana and Washington between 10,000 and 15,000 years ago. The most common of the volcanic type is red Jory soil, which is found above 300 feet elevation (as it had escaped the Missoula Floods deposits) and is between four and six feet deep and provides excellent drainage for superior quality wine grapes. Anything below 300 feet elevation is primarily sedimentary-based soil.

The Willamette Valley is protected by the Coast Range to the west, the Cascades to the east and a series of hill chains to the north. Its namesake, the Willamette River, runs through its heart. The largest concentration of vineyards are located to the west of this river, on the leeward slopes of the Coast Range, or among the valleys created by the river’s tributaries. While most of the region’s vineyards reside a few hundred feet above sea level, parts of the Willamette Valley do reach much higher. The Chehalem Mountains are the highest mountains in the Valley with their tallest point, Bald Peak, rising 1,633 feet above sea level.