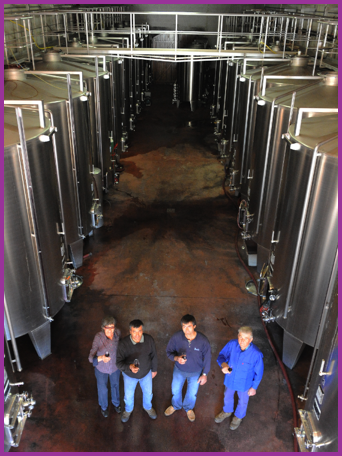 Chateau Anglade Bellevue is a family business dating from 1953. The Estate is located in Generac in the middle of the Blaye area. The Estate reawakened when the two sons took over the management in the 80’s. In 1993 a new facility was built with the purpose of improving the quality of the various cuvees produced at the Estate.

Blaye is a fortified town across the Gironde estuary from Margaux in the bordeaux region which has been exporting wine much longer than the famous Médoc. It gives its name to a region of sca@ered vineyards with soils that vary considerably (much more than in neighboring Côtes de bourg) but are mainly clay and limestone. At the beginning of the 20th century it produced mainly white wine for distillation into

cognac to the immediate north, and even today some of its white wine is distilled. Early 21st century tinkering with nomenclature resulted in most of the wines being sold as Blaye Côtes de Bordeaux, part of the Côtes de Bordeaux group. A much smaller number of growers produce reds according to the stricter rules of Blaye tout court. More than 740 acres of Sauvignon Blanc and Sémillon vines are responsible for some particularly successful, lively dry white Blaye Côtes de Bordeaux while Côtes de Blaye, a dry white based on Colombard and Ugni Blanc, is a small production today.

The Bordeaux region produces 25% of the French wines. Red wine represents 86% of wine produced in Bordeaux, with sweet white wines, dry whites, and also rosé and sparkling wines collectively making up the remainder. Bordeaux wine is made by more than 8,500 producers or Chateaux. There are 54 appelations of Bordeaux wine. The most famous are St Emilion and Pomerol in the Libournais area, St Estephe, Pauillac, Margaux and Saint Julien in the Medoc area. 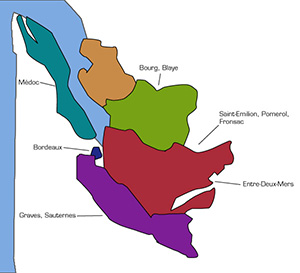