I have enjoyed Beaujolais Crus and the nouveau for years. The arrival of the Beaujolais nouveau was always exciting as it was celebrating the summer we just left, but also announcing the winter ahead. We knew that Christmas was just around the corner!

I have always been a strong advocate of Beaujolais wines as the diversity of its 10 crus offers a wide diversity of taste and flavors, each expressing a different soil.

Beaujolais is a fantastic wine region, but well underestimated. The region produces mainly red wine from the Gamay grape, but consumers are showing an increasing interest in the white wines for their fruity and fresh fragrances.  The trademark of the Beaujolais wine making is the whole-bunch, semicarbonic maceration vinification that brings its noticeable fruity taste.

Wine has been produced in Beaujolais area for centuries, supplying the city of Lyon and its now famous “Bouchon”. Beginning in the 17thth century, Beaujolais became widely popular when the Briare Canal opened and the abolition of Burgundy Taxes to transport wine allowed shipment to Paris, the major wine market and gateway. 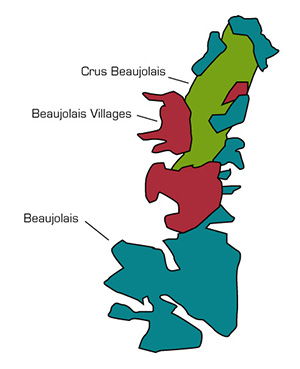